It’s that time of year again… The days are getting shorter and cooler, the mosquitoes are finally cutting us some slack, the hummingbirds will be migrating soon… And the Yellowjackets are suddenly all over my hummingbird feeders.

I love watching our local hummingbirds and keep feeders up for them throughout the warm season. I usually put them out around late March/early April when I think the hummingbirds may start visiting again. No problems all spring/summer. Until now. Now, seemingly out of the blue, the hummingbird feeders are just covered in wasps. Yellowjackets specifically (genus = Vespula, family= Vespidae). This happens every year, but why? Why do the Yellowjackets leave the feeders alone all year until around now? I know they’ve been around the property all year – both in the garden and on the attack when I mowed earlier this year…

Well, there are two main reasons my hummingbird feeders are suddenly full of wasps instead of birds. The first reason is that most of the yellowjackets are now unemployed. Yellowjackets are social colony nesters and have queens, worker females, and males. Throughout most of the year the worker Yellowjackets are kept very busy hunting for insects and other meat sources to feed all the baby Yellowjackets back in the nest that the queen is producing. In addition to constantly searching for building materials like wood and paper to expand their nest for their growing family. Despite often being temperamental, during this time Yellowjackets are actually beneficial predators and great to have around your garden for pest control. They even do some pollinating while they’re at it.

Unfortunately (or fortunately depending on your perspective), at the end of summer, around now, things change for the Yellowjacket. Most Yellowjackets only live a about a year. So at this point all the babies from earlier this season have grown up, can feed themselves, and probably won’t live much longer unless they are queens. The old queen (aka boss lady) dies or will soon die, and the new queens abandon the old nest to mate and find a new home to overwinter in. In essence, all the old queen’s workers are out of a job and have nothing left to do except wait for winter and death. Now that they can focus on just feeding themselves for their remaining time, they stop hunting for nutritious proteins (like they were doing most of the season) and turn instead to those delicious high-energy sugars. I guess I can’t really blame them. I know I bought an awful lot of sugary things when I first moved out of my parent’s house and had the freedom to eat whatever I wanted… And if you know you’re going to die soon, why not eat only yummy sugary things?

The second reason is that there are just more total Yellowjackets around right now (now that the babies are all grown up) and there is less nectar available. Only the baby Yellowjackets actually eat insects and meats. The adults primarily subsist on nectars and sugars. Normally there is an abundance of flowers nearby that can fill these needs, but now that it’s getting cooler and the days shorter, there are a lot fewer blooming plants around than there used to be. There are also no sugary substances being produced within the nest since there are no more babies. In exchange for being fed bits of caterpillars and other meats, the baby Yellowjackets usually produce a sugary substance for the adults to eat (nerd word of the day: trophallaxis= the direct transfer of food between two individuals). So. Fewer flowers, no in-house sugary bug syrups, and more hungry tummies to feed. This all leads to the Yellowjackets needing to find new food sources. Like the sugar water filled hummingbird feeders I so conveniently provide. Since the new queens need to live until next spring to start new colonies, it’s even more important for them than normal to stock up on as many sugary substances as possible to make it through the winter. At least they all seem too busy drinking nectar to be concerned with me sticking my phone in their faces for photos lol…

So now you know 😄 To read more about Yellowjackets, check out:

Video of Yellowjackets at my hummingbird feeder…

We’re still trying to figure out how to add comment boxes to the blog, so in the meantime, send me an email!
We’re also on Facebook now so you can leave a comment or start a discussion there too if you want.

While you may not like stinging wasps around your house, they do make some cool looking jewelry. I figure if they are dead already, I might as well try to do something with them :) Here are some recycled specimens looking for a forever home: 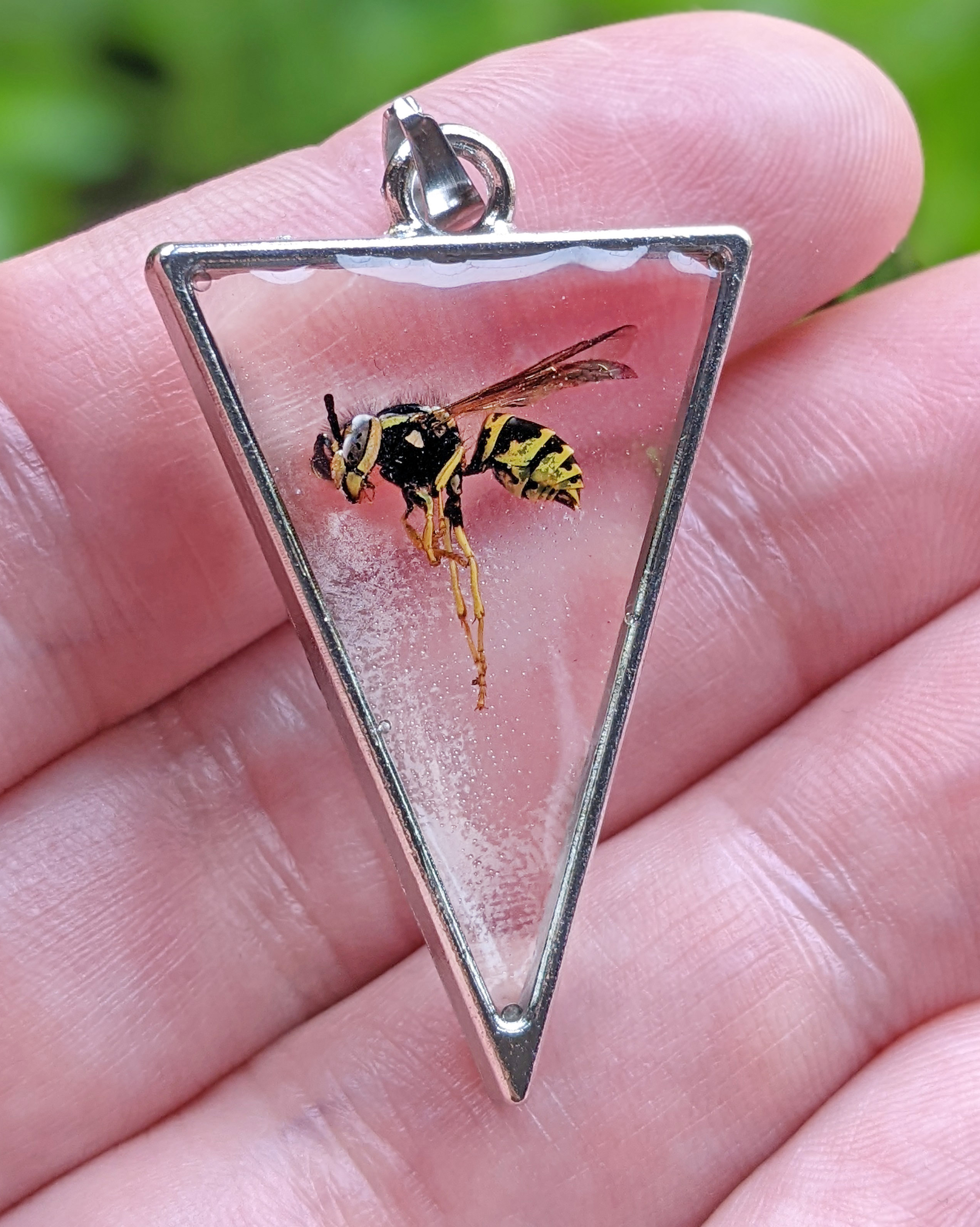 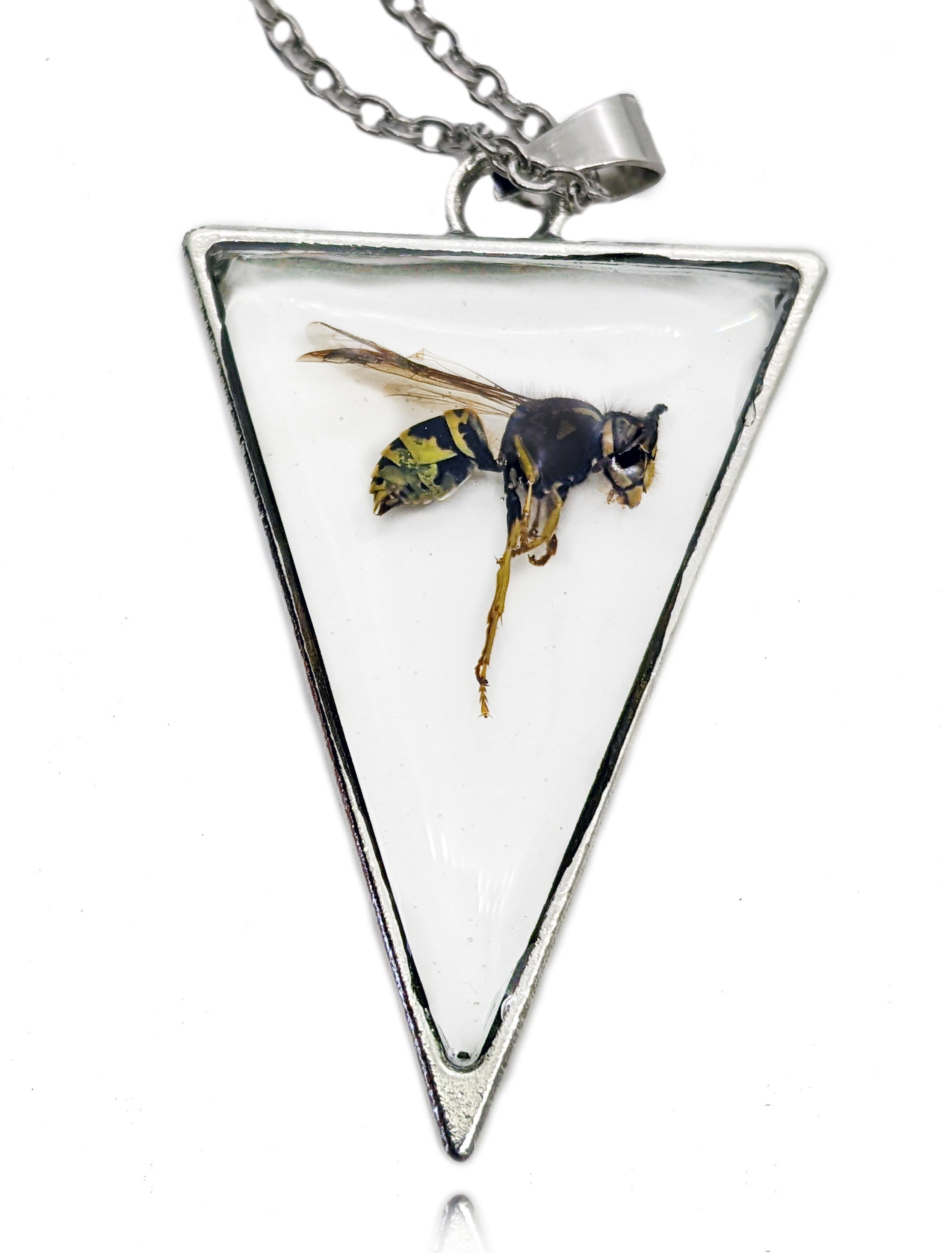