Do you have annoying brownish bugs crawling all over your doors and windows? Are they periodically bumping or flying into you at the most inconvenient times? Do they frequently come inside just to get stepped on (or sat on!) accidentally and emit an unpleasant stinky odor when squashed? If so, you are not alone.

In addition to the Boxelder Bugs I wrote about the other day that are swarming my house in high numbers, I also have tons of the most annoying stink bugs milling about. The infamous invasive Brown Marmorated Stink Bug, Halyomorpha halys (family Pentatomidae), to be precise. Also commonly referred to as BMSBs for short (it is a bit of a mouthful). These BMSBs seem to be incredibly dumb bugs, constantly bumping into me, buzzing around my lamps at night, getting stuck in the corners of the windows and dying, and frequently getting unintentionally smashed under foot. More food for the Rumba I guess (Rumba = automatic vacuum for people like me who hate cleaning lol). Unfortunately, when they do get smashed, or otherwise disturbed, they release a rather stinky odor. I even had one that somehow managed to get onto my back, which I then accidentally smashed when I sat on the couch. It took me a while to finally figure out what that icky smell was that seemed to be following me around. Terrible lol!

The Brown Marmorated Stink Bug is an invasive species in North America and was first introduced around 1996. Since then it has quickly been spreading across the continent (check out the cool map from Wikipedia below). Based on genetic research, the BMSB was probably originally introduced from China, but it is native throughout many parts of Asia. The BMSB is terrible agricultural pest, both here and in Asia, and will feed on over 300 different plants from cherries and peaches, to corn, tomatoes, and peppers! They get the “marmorated” part of their name from the marble patterned edge the adults have and the “stink bug” part from their stinkiness (as you probably guessed). The stinky odor they produce is a defensive mechanism to help deter predators from eating them. Definitely works on me. No stink bug salad for me, thank you.

Right around now in the fall, and often in the spring when it starts to warm up as well (when they try to leave your house), is when most non-farming folks start to notice the Brown Marmorated Stink Bug. This is when all the BMSBs are looking for a place to hide out and overwinter. What better place to sleep away the cold months than a nice warm, dry, sturdy human structure? So, as you may have noticed, the BMSBs start congregating around building doors and windows waiting for us to let them in. However unintentionally our admittance is. They then proceed to be most unwelcome houseguests by bumbling around the house looking for a good sleeping spot, landing in your coffee, sneaking under your feet, and sometimes falling of the ceiling at night to give you a quite a fright while you were trying to sleep. They can also be super annoying in the spring when things start to warm up and they all of sudden want to be back outside. Trust me, they’ll let you know when they are tired of your begrudging hospitality and ready to return to nature. They’ll be all over the doors and windows again after meandering about the house.

Luckily, the BMSB is harmless to humans (other than destroying our food crops), although there are some rare and “lucky” people who occasionally develop a mild allergic reaction to chemicals in the bug’s stinky odor. Like dermatitis when you accidentally squash one on your skin, or conjunctivitis if you rub them on your face (darn, I was planning on using them as a facial moisturizer). Generally, if you tend to have allergic reactions to other bugs like cockroaches and ladybugs, you might react to these as well. For most of the rest of us though, they can crawl all over our person without issue – although I don’t recommend it since then you’ll likely smell like them… Unless you like that kind smell. No judgment lol. You can have the ones from my house :)

I generally try not to promote the unnecessary killing of insects, but the Brown Marmorated Stink Bug is one you definitely shouldn’t feel bad about removing from the ecosystem. To dispose of them without smashing and releasing more stinkiness, you can scoop them into a container of soapy water (remember to dump it out every few days), knock them into an empty container (with lid) and stick them in the freezer over night, or vacuum them up if you have a ton of them. Just keep in mind if you vacuum them, the vacuum will probably stink for a while.

If you see the BMSB at your house, you can also report it through the Early Detection and Distribution Mapping System (EDDMaps) site and help scientists track the spread. Make sure you include a photo though! Otherwise its super hard for the folks at EDDMaps to confirm your report :)

Want to learn more about the BMSB? Check out these useful resources:

While they may be super annoying around your house, they do make some cool looking jewelry. I figure if they are dead already, I might as well try to do something with them :) Here are some recycled specimens looking for a forever home: 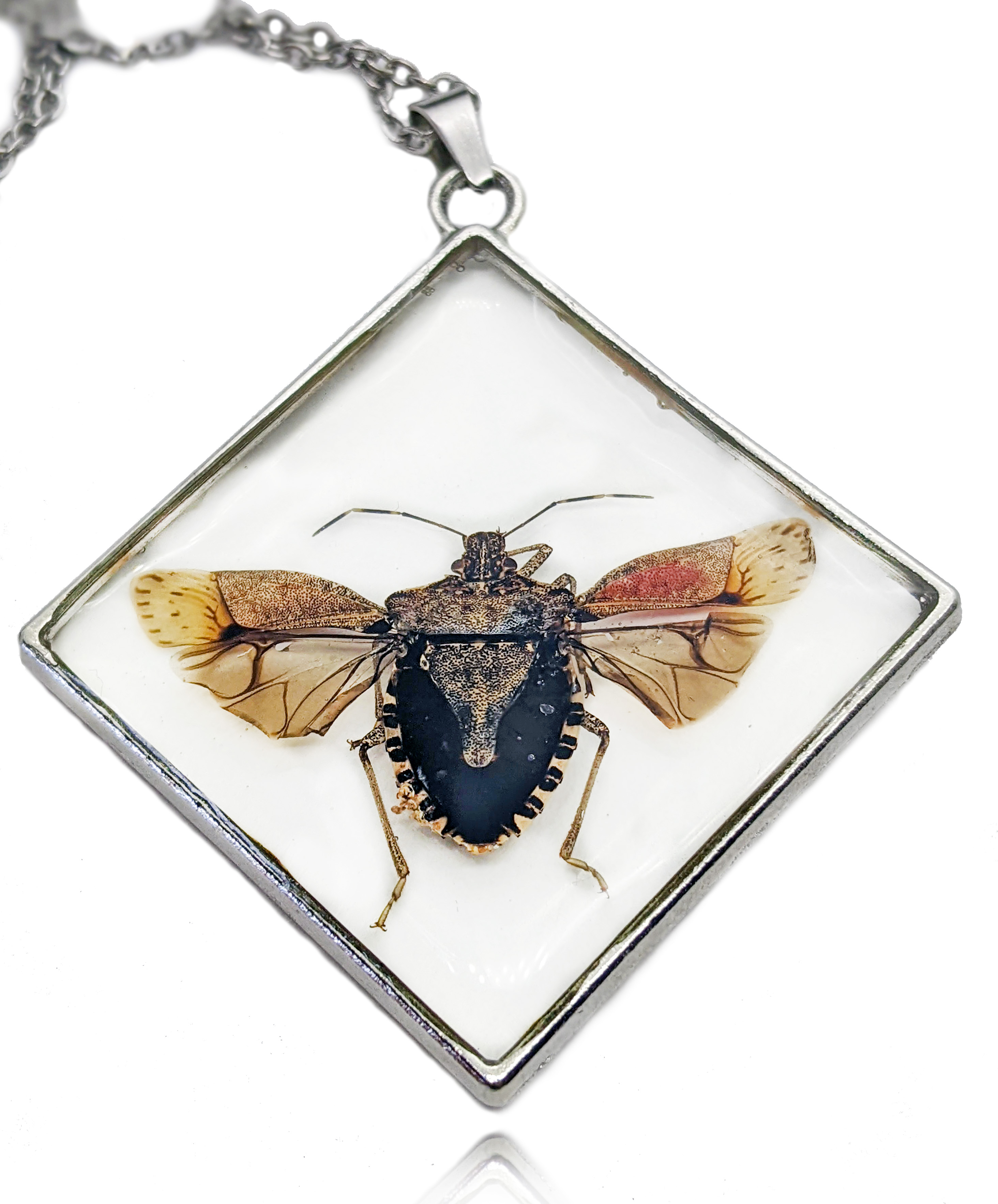 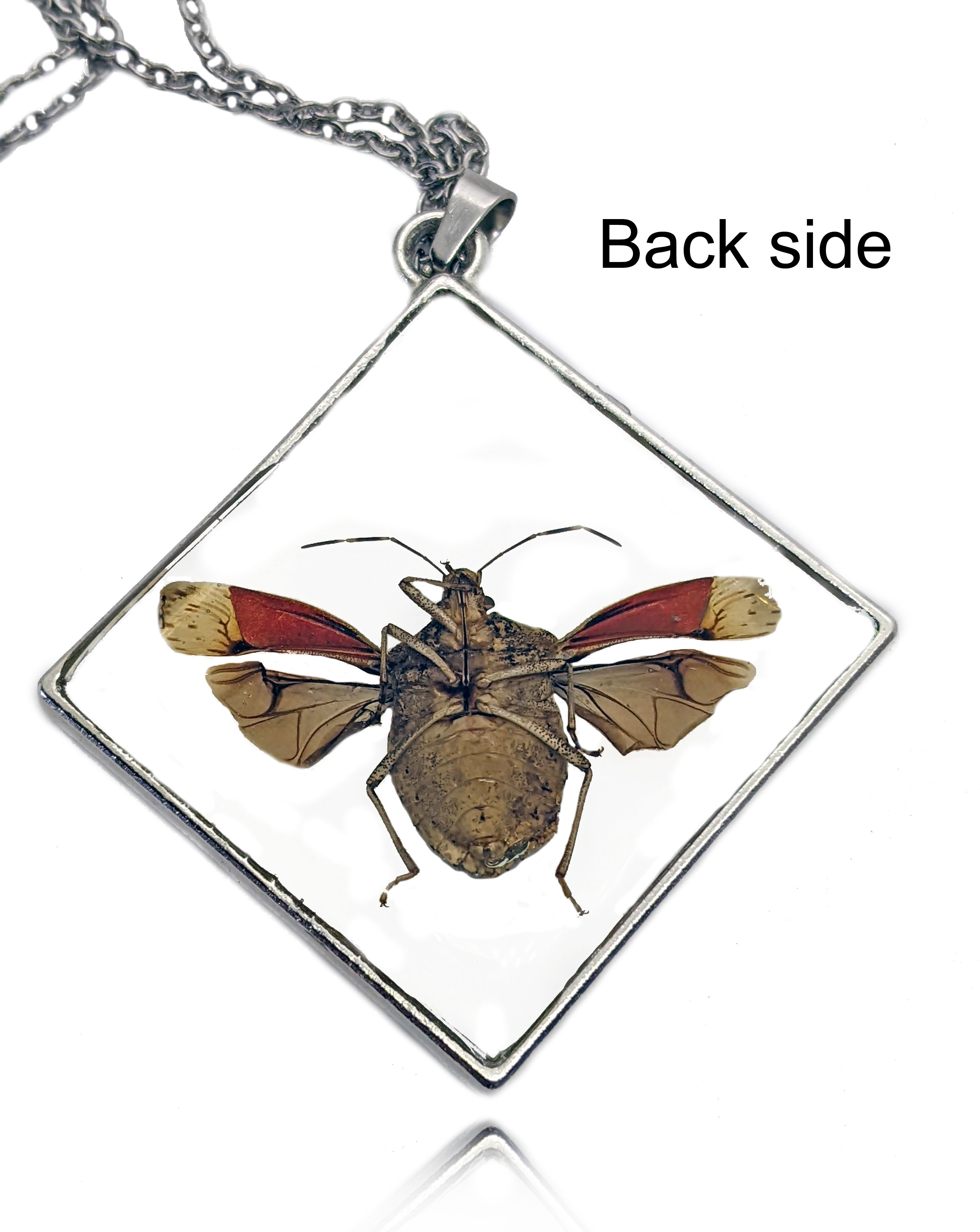