Did you know not all ladybugs are female? These ferocious bugs certainly aren’t lady like either when they’re chowing down on the sap sucking critters eating your plants. And, to top it all off, ladybug’s aren’t even “true bugs”. They are actually a type of beetle. Basically the whole name “ladybug” is a misnomer. Well then, lol!

Ladybugs, also commonly called ladybird beetles (although not particularly bird-looking to me), or lady beetles (although not all female), are a type of beetle in the family Coccinellidae. There are about 500 different species of ladybug found in North America! And with the exception of just a few notorious species like Mexican Bean Beetle and Alfalfa Beetle, most ladybugs are actually beneficial predators. That’s kind of amazing considering how many different species there are!

Now, on the surface, the name ladybug (the name I grew up with), or the slightly more appropriately lady beetle, doesn’t make much sense given that it may not be a female, isn’t a bug, and isn’t a bird. However, the beetle may have actually been named after the Virgin Mary (mother of Jesus in Christian religions). Apparently, the combination of the beetle(s) being considered highly beneficial, the Virgin Mary frequently shown in red in early artwork, and V. Mary often referred to as “Our lady”, led to the name “Our Lady’s Bird”. This was way back in 1807, when the beetle was first described. Over time (of which there has been plenty!), the name “Our Lady’s Bird” has morphed into the more commonly recognized name “Lady Beetle” and/or “Ladybug”. Depending on where you live.

Ladybugs are spectacular at finding and eating small sap sucking creatures that are feeding on your plants. This includes insects like deceptively cute aphids, ugly scales, weird mealy bugs, nasty thrips (story coming this winter), and many others. Ladybugs are wonderful predators to have patrolling your garden. As a bonus, unlike some insects where only the larvae (aka baby beetle) eat the bad bugs in your garden, both the adult and the larva of the ladybug are ferocious eating machines. Imagine Pac-Man - just in real life he’s a round beetle gobbling up itty bitty aphids lol.

The most common species of ladybug I’m used to seeing around my house is actually an introduced species of ladybug, the Asian Lady beetle, Harmonia axyridis. The Asian Lady beetle has many names including, Harlequin Ladybird, Multicolored Asian Beetle, and Halloween Beetle, just to name some of the most common ones. It also has a ton of different colors, from pale orangish-peach to bright red to mostly black, with the number of spots ranging from anywhere from 0-22 spots or splotches. This can make it very difficult to tell native ladybug species from the introduced Asian Ladybug – even for an entomologist!

While the Asian Ladybug is native to areas in Eastern Asia through Russia, it was actually introduced to the United States on purpose. And believe it or not, introduced purposely numerous times! Apparently, the first time we tried to introduce it in 1916, it just didn’t take hold. But we kept trying in multiple states throughout the US, and even Nova Scotia, until finally managing to get self-sustaining populations in 1988. The reason we purposely brought the beetle over, and then kept trying until it took hold, was to help control pest insects on our crops (as I mentioned, it is an excellent predator). Now the Asian Ladybug is found throughout North America, is one of the most commonly found species, and is even considered a pest under some circumstances.

Contrary to popular belief, and what a lot of news articles written by non-entomologist say, the Asian Ladybug is a ladybug. It’s also a great predator to have in your garden (and I do like to garden!). It’s just that since the Asian Ladybug is not native to our area, it doesn’t have many predator or other natural population controls. This allows it to often outcompete native ladybug species for food and other resources, which can have cascading effects on our ecosystem. It’s also become so abundant in many areas, that around this time of year, the Asian Ladybug can become a bit of a nuisance for home owners as it tries to find shelter in our human made structures before winter hits- much like the Stink Bug, Boxelder Bug, and even Wolf Spider I wrote about earlier this year.

Despite helping us by eating a bunch of pest bugs like the soybean aphid, the Asian Ladybug can also be a pest to some fruit crops, like grapes and apples since it has a bit of a sweet tooth. Apparently, when it runs out of juicy aphids to munch on, it turns to nibbling on sugary ripe fruit. They usually only nibble at holes that other insects started, but unfortunately their chemical make up causes the fruits that were nibbled on to taste bad. Speaking of nibbling on things, the Asian Ladybug will sometimes nibble on us too. This is not unique to the Asian Ladybug though – any ladybug, introduced or native, may take a little bite of you if you are handling them when they’re hungry. Try not to be too upset - they are just trying to tell if we are giant aphids or not…

So. If you find an Asian Ladybug – try to keep it in your garden. And if they stumble inside when you open the doors, shoo them back outside. Just don’t relocate them to any new areas where they may not already be living. Even though they are pretty much everywhere already (and you can still find them for sale in some biological control suppliers), if given the option it’s better for the ecosystem to have native predator species than introduced. Remember, even though they are ladybugs, Asian Ladybugs are no ladies – they’re ferocious predators of pests and stiff competitors for natives…

To read more about the Asian Ladybug, check out:

Whether they are annoying youaround the house or helping you in the garden, they make some neat looking jewelry. I figure if they are dead already, I might as well try to do something with them :) Here are some recycled specimens looking for a forever home: 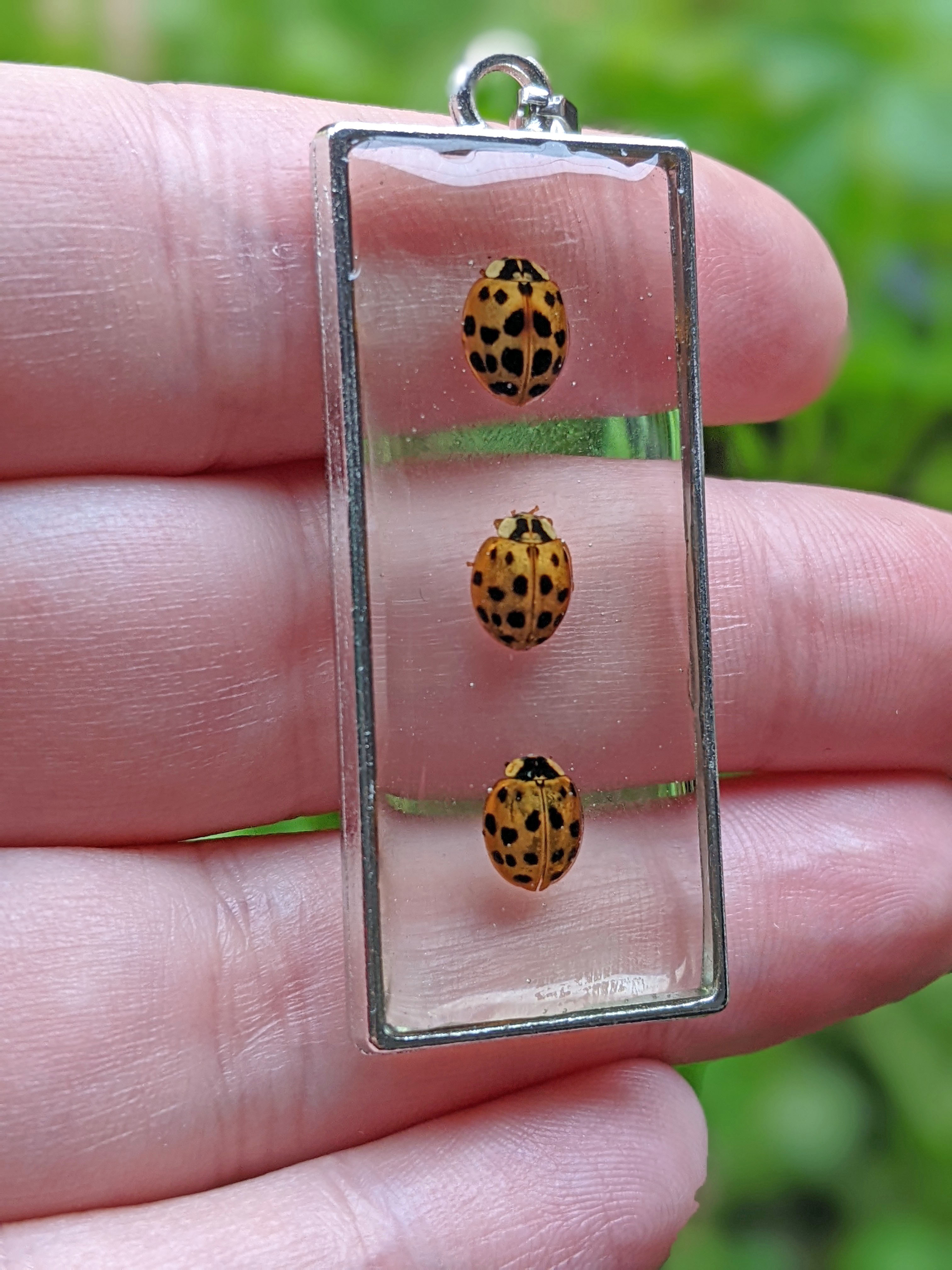 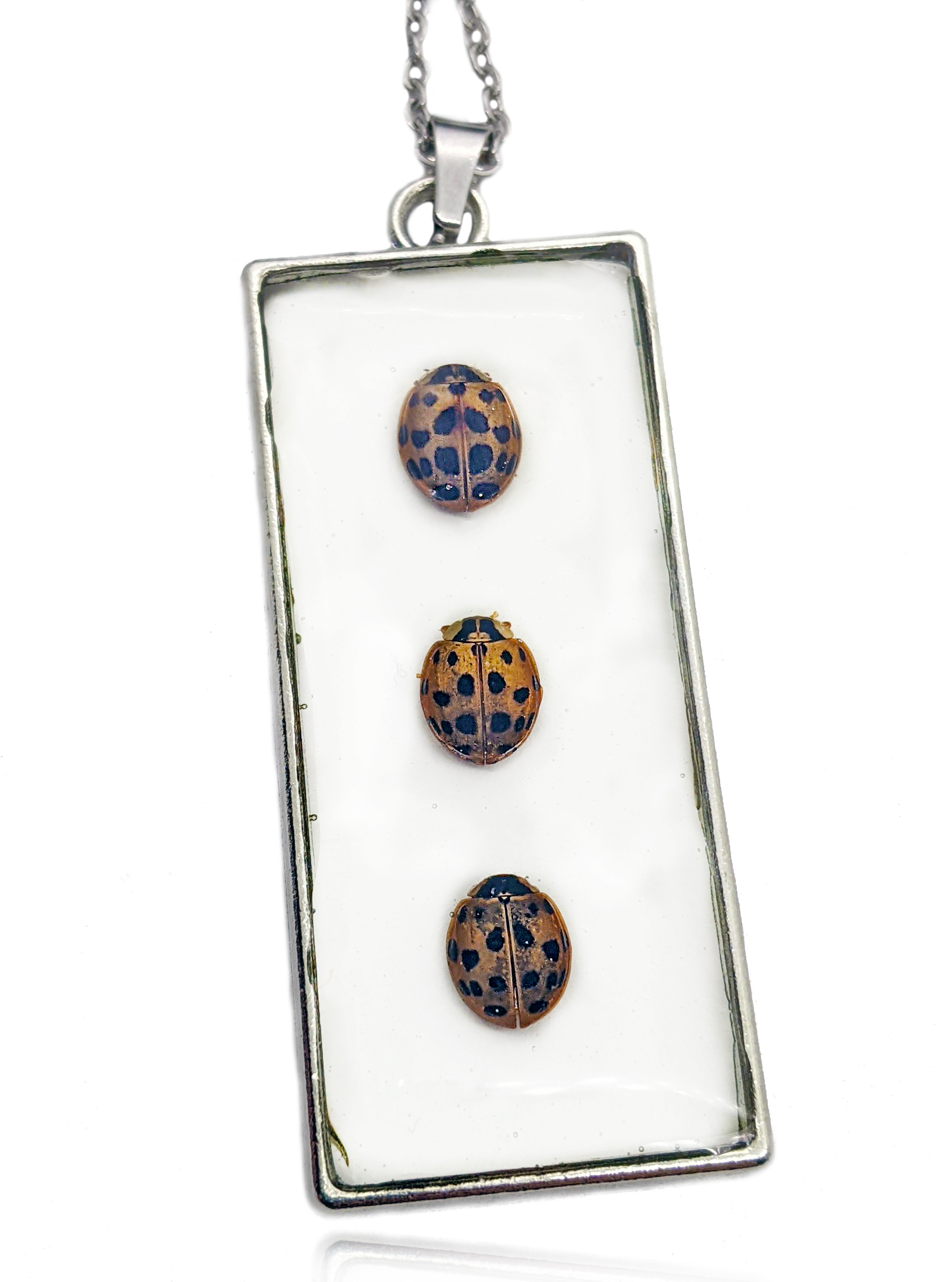 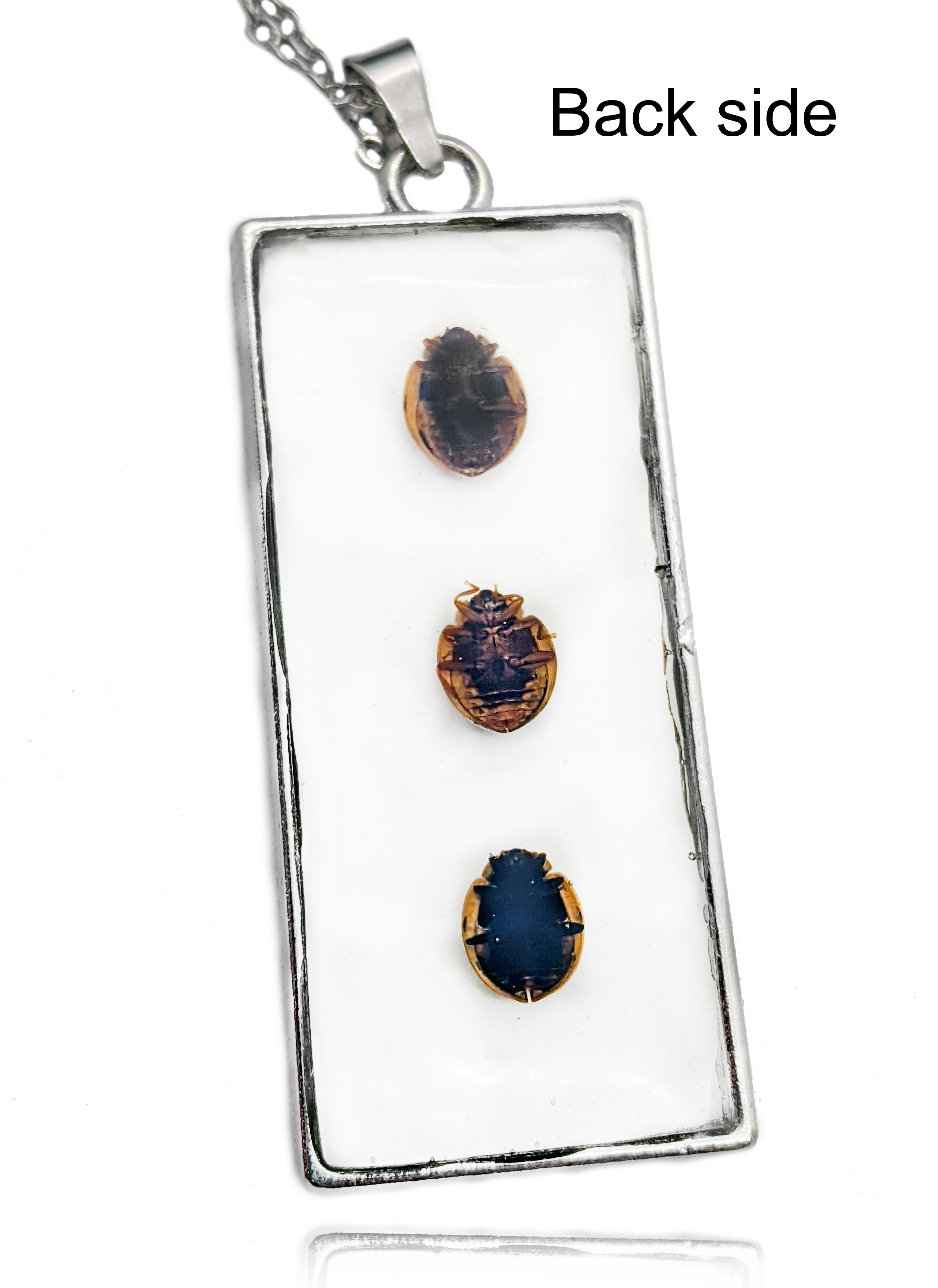 The gall of it! The naughty Hackberry Nipplegall Making Psyllid Why does the Woolly Bear Caterpillar cross the road?